Cyberpunk is Dead 1.0 is live! 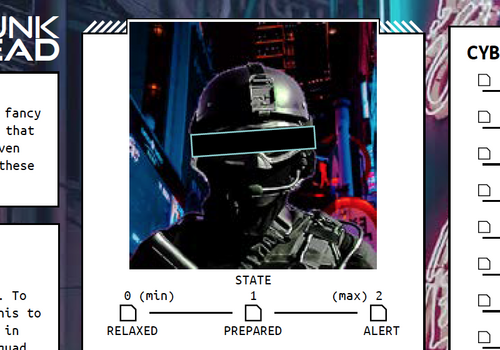 Cyberpunk is Dead is a project that has been brewing for a long while designwise, and in playtest for another. While it is done with a darkly humorous tone, it does come from a place of "I'd love to have a game to run these kind of stories with." The sort where you see things from the side of the "bad guys" in your typical cyberpunk setting.

With the 1.0 version, I've honed some rules, but as I was predicting with the 0.8 version, the system is actually quite ready. The problem was with my writing quality. One of the downsides of not being a native English-speaker, but having it as a learnt language.

But thanks to itch.io sales this year, I've actually managed to hire an editor for the project! The super-talented Christopher Stratton Smith helped me to get the text of the game to a final form that is actually understandable and conveys the meaning of what I was trying to say.  The fact that the game is playable is pretty much thanks to his incredible help.

Oh, and as I warned in the previous update... to enjoy the true meaning of Christmas (blatant consumerism), Cyberpunk is Dead is now live, and has a base price attached to it.

Get Cyberpunk is Dead [Forged in the Dark]

Cyberpunk is Dead [Forged in the Dark]